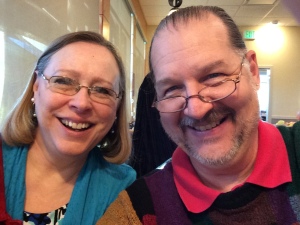 “I wish to live without hate, whim, jealousy, envy, and fear. I wish to be simple, honest, frank, natural…to face any obstacle and meet every
difficulty unabashed and unafraid.”-Elbert Hubbard

Something about the article about Donald Sterling that I wrote last week stirred up lots of discussion, and made me go back to take another look at what I was trying to say.

Over the years I’ve done a lot of personal work, which started with listening to, and observing my dad. He used to say, “You can’t change another person’s mind. You can only change yourself, and hope they’re paying attention.” I’ve taken that advice to heart. Over the years I’ve discovered something really amazing. If I stop pushing against what I don’t like in others, and just accept them for who they are, amazing changes happen.

I’m a very sensitive person, so I feel the pain of others deeply. It’s hard for me not to speak up when someone is getting abused. Here’s an example. When I was teaching high school, I had two students who were named to the State All Star Football team. They were full of themselves, and thought they ruled the world. This created a very bad situation in our classroom. There was a student in that class that everyone assumed was gay. The football players treated him very badly. When I tried to stop them from harassing him, they acted as if I had no power over them.

I called their parents, I talked to their coach, I talked with the Principal trying to get support to back me up. I got support, but the boys were convinced that they were gods, and nothing could touch them. They continued to treat that student badly. Of course, they treated everyone else with distain as well. One day I’d had enough. I took them outside the classroom individually, and told them that in my classroom everyone gets treated with respect. If they weren’t willing to do that, then I would have them removed, which would mean they’d have to make up the English class. I left the choice up to them. If I saw improvement in their behavior, we’d say no more about it. Otherwise they were out. They straightened up. Part of what made that work was their eligibility to play football during their senior year.

They stopped harassing the student they thought was gay during class time. I don’t know what happened outside of class.

Something happened to me during that incident. I had to accept that the two football players were probably not going to change their minds about gay people just because I said they should. The only thing I could do was to protect the other student, and show as much respect for everyone in the class as possible. Maybe it made a difference, maybe it didn’t. I’ll never know. However, by the end of the school year, the relationships among the students seemed to be much more amicable.

My dad was right. We can’t change someone else. We can only change ourselves. That’s been a big lesson in all my relationships, but particularly in my marriage. Like most of us, I thought once Barry and I got married, life would be perfect. But, of course, it soon wasn’t perfect. Over the years, I’ve learned that if I want Barry to love and accept me, I’ve got to stop expecting him to be someone other than who he is, and I’ve got to love him the way I want to be loved. I’ve realized that I can’t make him responsible for making me happy. Being happy is my job, not his.

Having written all that, I have to admit, that staying silent about issues as big as the way we treat others from different races, creeds and genders, isn’t good. We have to speak up. We have to engage in discussion. We have to look at our own attitudes, and admit when we’re wrong. We also have to treat the people who are racist, and full of hate with the kind of respect we wish they’d show to others, even though we’d like to punch them out.

Not long ago there was a great example of that. The Pastor of the Kansas church that makes a practice of demonstrating at funerals, showing signs full of hate, died. I’m sorry I don’t remember his name or the name of his church. This group was particularly hateful toward gays. A large group of people got together for a different kind of demonstration at his funeral. They stood outside the church, with signs of love. They could have returned hate with hate. But they didn’t. They turned the other cheek and returned hate with love. I don’t know if that act of kindness will make a difference in the lives of the people of that congregation or not. I do know that being kind to someone has a better chance of affecting change than treating them with hate. Treating someone who’s mean and hateful with love is a lot harder to do than lashing out in anger, but it’s the only way I know to bring about positive change.

2 thoughts on “You Get More With Honey Part 2”