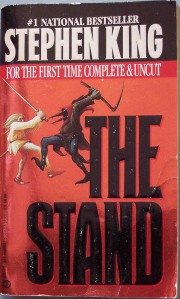 “You gain strength, courage, and confidence by every experience in which you really stop to look fear in the face. You are able to say to yourself, ‘I lived through this horror. I can take the next thing that comes along.’” ~ Eleanor Roosevelt

“I learned that courage was not the absence of fear, but the triumph over it. The brave man is not he who does not feel afraid, but he who conquers that fear.” ~ Nelson Mandela

I am not a fan of horror anything. I don’t like attending haunted houses on Halloween. I always shut my eyes at the bloody, gory parts of movies and I don’t read books in the horror genre. My distaste of horror probably has to do with the proliferation of slasher movies as I was coming of age, where the main attraction are the number of deaths and the buckets of blood generated from them.

Another reason I don’t like horror books and movies is because I’m a highly sensitive person. I dream about what I’ve just watched on TV or read in my book, so you can understand why I stay away from blood and gore especially right before bed.

Last night, as I was driving home from teaching, I was catching up on my Super Soul Conversations podcast. Oprah was talking to Jordan Peele, the writer, director, and one of the producers of the Oscar Nominated film, Get Out. It’s a horror movie, so I was not planning to go see it even though it’s a character study of African American/White relations, something I think extremely important. But Jordan Peele said something interesting about the horror genre, and I’m paraphrasing; it’s a genre that helps us face our fears. Hmm, maybe Get Out is a different kind of horror picture. I might want to see it because I’m a big fan of facing my fears.

As I was listening to Jordan and Oprah talk, I couldn’t help but connect it to this post. I had planned to write about Stephen King’s The Stand.

The mini-series came out in 1994. Barry and I were intrigued by the trailers. It seemed like it was going to be an interesting character study couched in a good vs evil story line so we watched and loved it. It’s really more a dystopian type story than what I would call true horror.

The story is this: A plague has been accidentally released at a government facility and quickly spreads across the United States and the world. Almost everyone dies. In the U.S., those who live fall into two camps, the ones who dream primarily of Mother Abigail, a 106 year old woman living in Kansas, and those who dream primarily of Randall Flagg, a demon character in human disguise. The Mother Abigail group join her and move to Boulder, Colorado. The other group joins Flagg in Las Vegas. A war between good and evil ensues.

The religious references are mostly from an Old Testament point of view, which at first was a major drawback for me. However, as a student of religion and spirituality, I thought King’s take on this fictional spiritual war was fascinating. It was after all, just a story.

Some of the most interesting characters were the ones who chose to align with Flagg. Lloyd Henreid, for example, is a mixture of admirable qualities which includes loyalty, and not so admirable ones like self-interest. At one point Henreid knows he’s going to hell for his decision, but his loyalty to Flagg, who saved him, prevents him from making a new choice.

Trashcan Man is another fascinating character. He’s a mentally ill pyromaniac Flagg has recruited for a special mission, not realizing that that might not have been such a good idea.

On the other side, we have Nick Andros, a deaf mute who becomes one of the prominent leaders trying to establish and rebuild the “good” community, and Tom Cullen a “retarded” man who ends up being one of the heroes at the end of the story.

The cast of characters is long and varied with enough unusual backgrounds and personality traits to keep the viewer or reader engaged. Mother Abigail, for example, talks to God and shares what He tell her. She’s wise, but she makes mistakes along the way. Flagg, on the other hand, who seems to be strong, eventually shows how deeply insecure and frightened he really is. These kinds of characters make for a richly layered story.

The mini-series was so good because Stephen King was part of the production. And that compelled me to go right out and buy a paperback copy of the book. It’s over one thousand pages long filled with more unusual characters than I’ve had space to write about here. They find themselves in extraordinary circumstances and must try to cope and rebuild. Those are the kinds of stories I find most satisfying and in The Stand Stephen King delivered exactly that.

Who knows, I may read another of his books one day. My candidate is The Green Mile, another book recommended to me by the movie made from it.

Thanks for reading, liking and commenting. I appreciate it very much.

One last thing, a commercial announcement. I’m having a Spring sale of The Space Between Time for FREE, beginning tomorrow, March 22 and continuing through the 25th. If you want the ebook version, click on the Smashwords link below to download for any e-reader available. If you want a physical book, click on the Amazon link. The only payment I ask of you is to write an honest review and share it not only on the site where you got the book, but on your social media sites as well. Word of mouth is still the best way to advertise. Thanks in advance.

Lucinda is the author of The Space Between Time, an award finalist in the “Fiction: Fantasy” category of the 2017 Best Book Awards. It’s a historical, time-travel, magical realism, women’s novel, and is available in all ebook formats at Smashwords, or you can find the ebook at iBooks or Barnes and Noble. I you prefer a physical book, you can find a print-on-demand version at Amazon. To join her email list, click here. She will never sell the names on her list.

2 thoughts on “Stephen King’s The Stand”